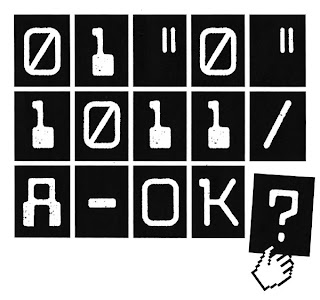 If a programmer working for Goldman Sachs makes a copy of a code that he wrote and posts it elsewhere as an example of his body of work, does it constitute stealing? Former computer programmer Michael Osinski considers the current Goldman Sachs/Sergey Aleynikov lawsuit on the Times' op-ed page today.

For the illustration, Kim Bost gave Matt Dorfman the option of providing a single large image for the top of the page or making a slightly smaller one for the top in addition to a small crawlspace for a spot illo just beneath it. With the subject revolving around theft, this second option gave Matt and Kim an opportunity to, in essence, steal a chunk of the image itself to bludgeon the point home. Kim's good.
Posted by Danny at 2:01 PM