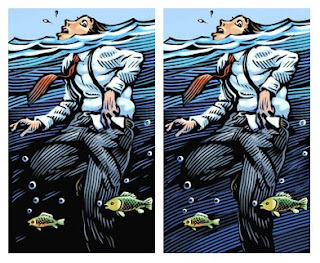 The illustration above was done by Tim Foley for the Wall Street Journal last week. “The original version is the one on the left, as I wanted to show the dark murky depths swallowing the figure near the bottom of the layout. However, the designer was worried about how it would print, so I revised it so that the solid blacks weren't so pronounced. I'm torn as to which one I like better.”
Posted by Danny at 10:25 AM